This morning I woke up at 5am, showered and hit the round around 5:30am on a 635-ish mile drive from Northern NJ to Dayton OH. This is my first time to Dayton and I’m looking forward to what the next few days will bring.

It was raining most of the morning for the ride on I-80. I had the radio xmiting APRS for K2DSL-7 and I had the other channel on 146.52. Somewhere in Pennsylvania, I heard a short conversation between 2 stations. 1 station was dropping out for me but the other was strong. After they finished, I called WE1M who happened to be just a couple vehicles behind me and travelling to Dayton from CT. I spoke with Gary, WE1M and Tom, K1TMM who was travelling with Gary for quite a while before we decided to find a place to eat. We pulled off of  I-80 and into a Denny’s. We had a good chat and they gave me some advice for a first timer to consider while we had a nice breakfast together. When we finished, I took off a bit ahead of them and didn’t hear them again for the rest of the ride. I’ll keep an eye out for Gary & Tom during the rest of the week.

As I approached the end of PA, I was keeping an eye out for the K3LR antenna farm that is right along the highway. I’ve never been out this far on 80 so I never passed it even before I became a licensed ham radio operator. As I was probably a mile away, I was pretty sure I spotted a couple of towers and I was in complete amazement as I passed by. I have seen ham radio heaven and it is K3LR. Here’s a picture I snapped out the window as I zoomed by (click to see a larger view)… 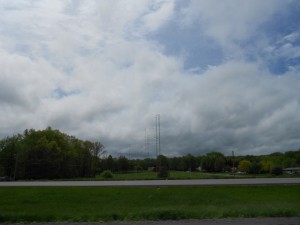 I’ll see if I can snap a better picture on the ride back home on Sunday.

Got to Dayton without any issue and without too much traffic. I found the Doubletree Hotel very nice when I checked in. I unpacked and relaxed for a bit before heading out around 7:30pm to the Crowne Plaza to check in for tomorrow’s Contest University and to visit the Contest Supersuite.

Weds night the Contest Supersuite was relatively calm. As I was checking in and gave them my call, the person in front of me turned around and it was Amir, K9CHP, who I’ve communicated with a bunch online via blogs/emails and even an on-air contact back in Feb. We spent the night chatting and we were joined by NT9F, Kelley. At 10:30 the pizza arrived and we all had some before calling it a night as we have to be back there before 8am for Contest University.