I’ve been busy at work and at home since returning this past Sunday from Dayton and my first trip out to Hamvention. Posts here from last week note the highlights from each day I was there. This post puts up some pictures I took while there. I probably should have taken more pics, but I will make do with what I have. All pictures below can be clicked on to open a larger view of the image.

I snapped the following picture on my drive out I-80 from Northern NJ to Dayton. It was raining most of the morning until about 5 mins before I reached this location right near the PA/OH border. This is the antenna farm for K3LR. The picture was taken as I was buzzing down the highway and I think it came out very well for being taken at *slightly* above the speed limit and out a car window. I cropped it to show the relevant portion. The picture really doesn’t show the vastness of everything that K3LR has at his location. 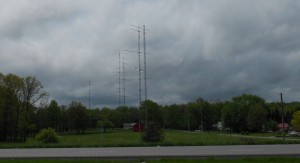 This next picture is of a spark gap transmitter that one of the hams brought with him and rolled out at the Crowne Plaza Thursday night. It was absolutely gorgeous and it really worked and I recall him saying it was about 1500 hours of work.  The transformer is the top left and to the right of that you’d see some pretty amazing blue lights between the 3 silver balls when the key was pressed down. I didn’t recall the ops call sign, but I did some searching and found a video from last year’s hamvention at http://www.youtube.com/watch?v=T8BTgiSnIzY indicating the op is N4GG.  I think my picture captures the gorgeous look of the transmitter better than the video, but the video shows it in action. I also took a video and just uploaded it at http://www.youtube.com/watch?v=EMeF6s7pFPY 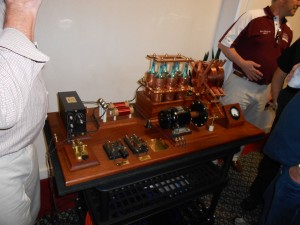 Here’s a picture of a very eco-friendly vehicle for Mr. APRS himself that I spotted in the flea market area: 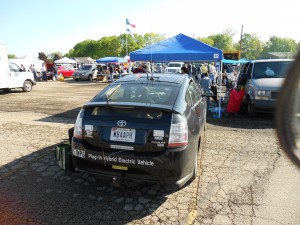 This picture captures Rob KC2RDW (left) and Steve W2ML (right) early the first day of the flea market. KC2RDW was a personal tour guide for me showing me the hamvention ropes. Rob’s a long time attendee at hamvention: 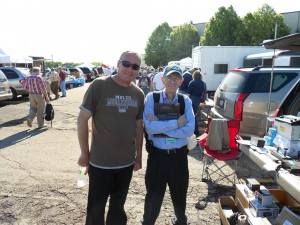 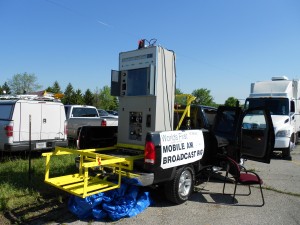 The large MFJ booth which was very busy both days I was at the show: 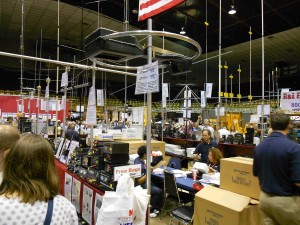 The Heil booth was stocked and busy. I snapped a picture of Bob Heil who was there as well talking with folks that stopped by: 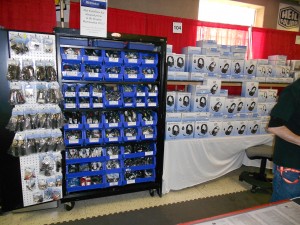 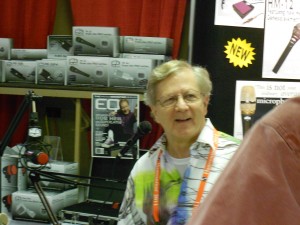 There was a large group of hams from BARA (Bergen Amateur radio Association) which is my local club in Northern NJ that made the trip out to Dayton. I happened to be by the YL booth when a bunch of the BARA YL’s affectionately known as BARA Babes stopped by. 4 YLs and 1 grumpy OM: 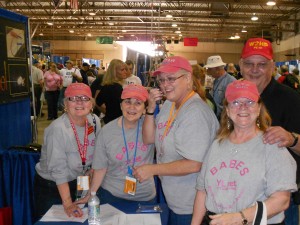 Gordon West, WB6NOA, was there in his booth and would give various demonstrations. I happened to catch him during one of his demos: 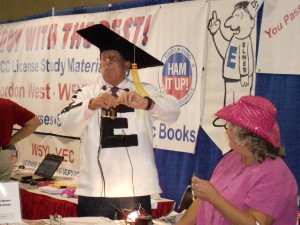 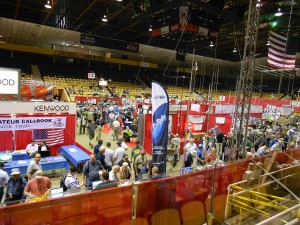 The ARRL had a very large area inside with sections dedicated to kit making, kids, DXCC checking, a large store of their products, and other ARRL related sections like LoTW. Next to the ARRL were booths representing various countries such as Germany, China, Japan, Qatar, the UK, etc. It was great to see such an international representation of hams. Here are some pics from that area of the show:

The German booth with a representative from DL land and 9K2CW from Kuwait: 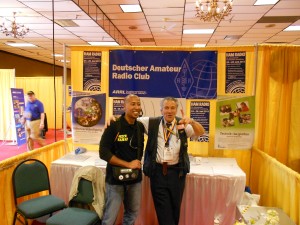 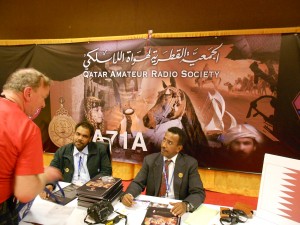 If you have $20k to spare, you can pick up a new Hilberling radio. Add in another $1k if you want the gold microphone: 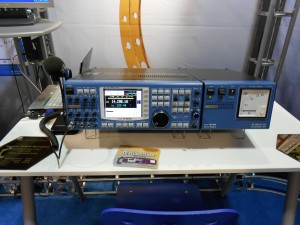 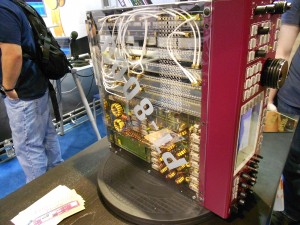 I wonder if my wife & neighbors would notice if I rolled this Luso tower onto my property: 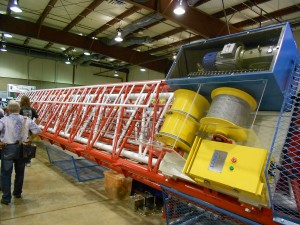 This last picture was taken at a forum on Saturday where Mike K4GMH (right) presented a history of RTTY contesting. In the picture (left) is Ed W0YK/P49X who gave 3 outstanding sessions at Contesting University a couple of days earlier. These are the top 2 RTTY contesters in the world as far as I’m concerned. The pic is a little blurry because it was dark in the room: 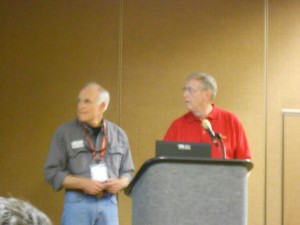 I hope you enjoyed a pictorial look at some of the sites I experienced at Dayton.