I’ve missed a few contests including the ARRL RTTY Roundup, one of my favorites, as I’ve been traveling or unavailable with family commitments. I had just flown back home late Friday after spending a tiring week working very long days out west, but I was looking forward to hearing and sending some diddles.

I updated N1MM+ and the computer, radio & antennas all worked fine. I didn’t spend too much time on Frday since I was pretty tired and logged just 61 Qs before turning things off for the evening.

Saturday morning I got up, grabbed some coffee, and fired things back up. I started on 20m working up and down the band working most any station I could hear. About 1430z I checked 10m and was hearing stations with no noise, easily working every station on the 1st call without any repeats. 10m is the most pleasurable band when it’s open. After 30 minutes I worked everyone I could hear, I switched over 15m and it too was hopping with very little noise. I spent 90 minutes on 15m before switching back to 10m for 1 hour, back to 15m for 1 hour, back to 10m and then off to 20m. Worked a few strong JA stations on 15m between 2215z & 2315z. I switched to focusing on 40m & 80m around 0015z before calling it a night at 0430z. I finished the 2nd day with exactly 400 Qs in the log and hoping 10m would be active and quiet on Sunday morning.

Sunday morning after doing a few things before getting on the air, I fired things back up at 1440z and went straight to 10m that had plenty of stations to work.  Like on Saturday, I spent most of the day switching between 10m & 15m going to 20m when things slowed down a bit.

While on 10m before switching to 15m, I heard HZ1PS in Saudi Arabia and he had a nice pileup. I listened to 2 exchanges to see how Peter was picking up the stations and on the 3rd exchange, I sent my call, waiting for it to quiet down, and sent my call again just once. Peter picked me up and here’s the exchange. I had some QRM at the end of his message but I think I got the overall gist of it.

In the midst of a pileup, Peter takes the time to send a personal message. After I got the message, I went to tell my wife. 635 Qs and this will be the one I remember!

In the afternoon @ 2033z, I was on 20m and came across a station calling CQ. VK3JA was booming in from Australia and I was pointed in the opposite direction toward Europe. I waited for him to call CQ one more time to make sure I copied it correctly and it printed perfectly. I sent my call once and he immediately came back to me with his exchange. I listed to make sure there wasn’t anyone else who found him before I spotted him. I listed for 1 minute and then the crowd descended upon him.

Same thing happened 30 mins later when I came upon TA7I in Turkey calling CQ and no one coming back to him. I put my call out and again, he came right back to me for a quick exchange. No one else was waiting so I spotted him and waited a minute before he had a pileup to work.

Here’s a map of the contacts made over the weekend created via ADIF2Map. Click to enlarge: 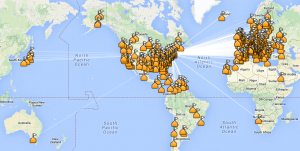 Logs sent in to the contest sponsor, LoTW, eQSL, QRZ, Clublog and 3830.