I set off for the day with a couple of items on my agenda. I wanted to get the ARRL TravelPlus data I mentioned yesterday loaded on my Garmin so that was the first place I went. It didn’t take long and it was loaded up.

I walked around a bit checking things out and I noticed a short line to meet with astronaut Doug Wheelock so I jumped on the line to wait. When I got up there, he was great. We had a little chat as he signed a picture of himself. A very friendly ham in line with me took a picture and a small video. Here’s a picture taken from the video. 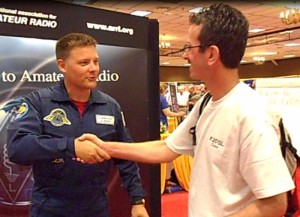 Another item on my list for the day was to attend the RTTY forum where Mike, K4GMH was speaking. I work Mike in almost every contest and I have heard great things from NO2T who is in my club and friendly with Mike. His talk about the history of RTTY contesting was great to listen to and some of the experiences you had to go through back then shows how far things have come. After Mike’s presentation I went up and introduced myself.

After that, I walked around the vendors for a while and decided to upgrade my car antenna so I picked up a Diamond SG7500 with NMO connector and a large magnetic mount for it. I’ll give it a test out on the ride back home tomorrow. I then went back to the hotel to pack up a little and rest a bit before the Contest Dinner over at the Crowne Plaza.

I got to the contest dinner and had a beer before they opened the doors and I picked a table to sit at. I sat with folks from NM, FL, OH & MI. The master of ceremonies was K1AR, the main speaker was K0DQ and VE3EJ was elected into the CQ Hall of Fame. Just before everything got started, I noticed Scot, KA3DRR walking in and sitting at the table next to me so I got up and introduced myself. Scot posts on his Radiosport blog at http://ka3drr.blogspot.com/ which is how I first knew of him. I’ve worked Scot in at least one contest and maybe a couple more. It’s always nice to run into folks you’ve met online or on the air. At the dinner there were lots of prizes with the grand prize of an Icom-7000 going to KL7RA. I’ve worked KL7RA on 15, 20 & 40m bands in CW, SSB & RTTY.

All that is left now is to drive the 10+ hours home on Sunday. I’ll be xmiting APRS as K2DSL-7 if you are really bored and want to track me on APRS.fi. I will have more to post during the week as I look through the pictures I have and post some that are meaningful and at least somewhat in focus. My first trip to Dayton was a resounding success starting with Contest University, the flea market, vendors, meeting many folks I have met on the air, and topped off with the Contest Dinner. I’m not sure I’d come back every year, but I’d definitely come back.