I need to post about last weekend’s CQ WW SSB contest and I’ll get it eventually. Hurricane Sandy passed through NJ this past weekend and boy did it do some damage. Things were sort of ok until a huge 70 ft tree from our neighbors yard came crashing down. Luckily it didn’t have a direct hit on the house or detached garage and mostly fell in between both, It took out the gutter on the side of the garage and gutters on both my 2nd floor and first floor of the house.

The tree also took out my G5RV and my 10/15/20m fan dipole. It bent the pole my dual band VHF/UHF antenna is on but otherwise I think that is probably ok. So without antennas I might not be on for a while. Hopefully I can get some new ones made and shoot some rope up to get them in the air and me back on the bands.

No power since since Monday around 6pm and I wouldn’t expect it back until late in the weekend or early next week. At the end of our street we had a huge tree come down and take 5 poles with it. 4 of the poles snapped in half and there’s still piles of transformers laying in the street. I have a generator for keeping the fridge powered and our phones charged but no heat and no hot water in the house. 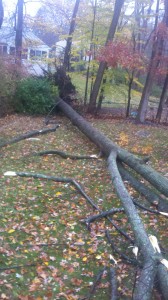 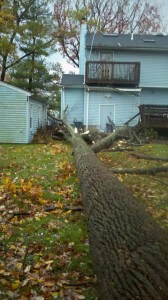 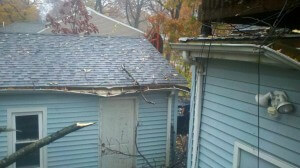 Some pics of the downed power lines (click to enlarge): 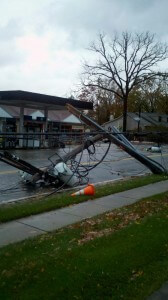 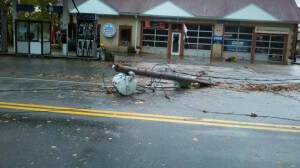 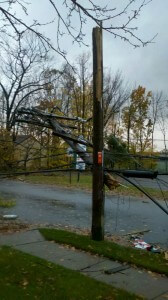 When I see pictures of the devastation in NYC and the Jersey Shore I know my family and I got away pretty lucky!
73,
K2DSL