The Makrothen RTTY contest has a couple of interesting twists. First, the contest has 3 different 8 hour sessions – 1 on Friday, 1 on Saturday and 1 on Sunday. Second, the points are based on distance between the 2 stations with a bonus on 40m and 80m. It really causes your score to skyrocket compared to contests with a few points per QSO.

I was exhausted on Friday night and after just 31 QSOs, I was falling asleep at the radio and called it a night. I wouldn’t have stayed up too late anyway as our club had a hamfest in the morning and my alarm was already set for 5am.

Saturday I got home from the hamfest about 3 hours after the 2nd session started and got on the radio. Bands weren’t great with no signals on 10m. Even 15m was light with signals so most of the time was spent on 20m. 40m allowed a bit of DX for big points. Ended up at the end of session 2 with 142 Qs and 500k points.

Sunday, with 3 hours of the final session gone while I slept, I got a cup of coffee and fired things up around 7am local time. 15m had signals this morning though 10m was still barren. After making some contacts on 20m and with 3 hours left in the contest I checked 10m right at 9am / 1300z and could hear some signals and then some more. 10m was open and stations were flocking to the band. I spent the rest of the contest on 10m and 15m before time ran out and I had 286 QSOs logged with 1.4M points. 42 different DXCC entities were worked.

Here’s the score summary from N1MM+:

Here’s a map of the contacts made this weekend created with ADIF2MAP (click to enlarge): 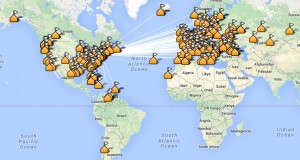 Fun contest and I’m glad 10m opened up for a portion of it.